I was in between sets at the gym, scrolling through Twitter and generally trying to look busy so no one would think I was approachable enough to ask if “they could work in” when I came across this gem of a tweet:

Although I wholeheartedly laughed at the fact that there are people who think that this counts as “fully furnished” (albeit, they might add a Fight Club poster, a collection of empty alcohol bottles or something equally tacky), I also had a moment of terror that there is a very real chance that this is what my future apartment will look like.

To explain, I probably have a ripe $12 and an unreasonable number of haircare products to my name. That’s it.

Fortunately, I have been blessed to have my existence coincide with the growing lifestyle trend of minimalism. Here and here are a couple definitions of minimalism by practicing minimalists, but I’m going to summarize it as owning less things as a way to make your life better (? I still don’t fully get it). 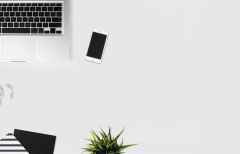 We (broke students/recently-graduated humans) live in a special time during which we have the ability to use minimalism to mask the fact we can’t afford basic things. Only one plate, mug, glass, and bowl? Minimalism. One lone chair in my living room? Minimalism. Not owning a T.V. and instead consuming all of my media on my laptop from the moderate comfort of my one chair while using my one fork to eat instant ramen? Minimalism.

Not only do you get away with having less items in your home/apartment than a small rodent typically has in its nest, you also are considered a trendy, with-the-times individual. Some might even go as far as to call you enlightened due to your lack of dependency on material things.

While I think there’s something to be said about mass consumerism and the way we have been conditioned feel the need to own certain things, your current living and financial situation may not be what you want it to be yet. You might be looking forward to being able to get that nice coffee table and couch set.

Comment the most tragic student living situation you’ve ever seen. Not so much a living situation, but a past significant other told me that his roommate mistook a container of aloe vera in their bathroom as hand sanitizer and effectively did not wash his hands for two months.

Coming up next: internship life is cool